Though Colombia had not reached the finals of the World Cup since 1998, the team arrived at Brazil 2014 as many people’s dark horses. The reason was that over the last two or three years Los Cafeteros had produced a crop of exceptionally talented players that had begun to make names for themselves across Europe. The first of these was Radamel Falcao, who after enjoying Europa League success at Porto had joined Atlético Madrid in 2011, now coached by Diego Simeone, who had worked with the striker as a youngster at River Plate. Falcao won a second successive Europa League title in 2012 but left the club the following summer to join Monaco, where a knee injury in a Coupe de France game threatened to keep him out of the World Cup. 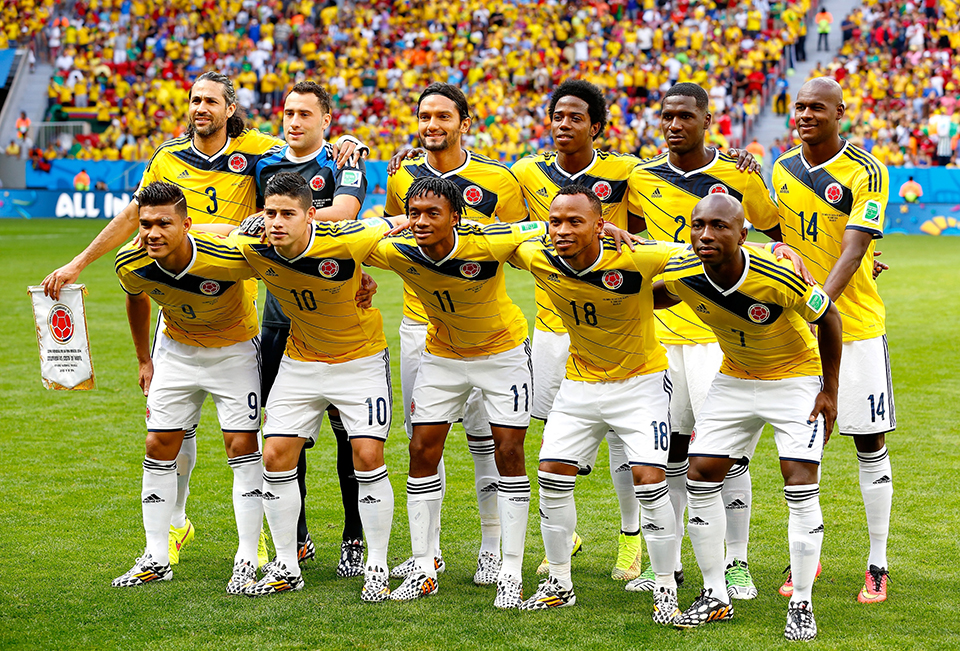 While neither Jackson Martinez nor Teófilo “Teo” Gutiérrez would quite fill the void left in the absence of Colombia’s star striker, both could be a handful for defences. But it wasn’t just up front where Colombia looked strong. Tricky winger Juan Pablo Cuadrado’s career had taken him to opposite ends of Italy, first at Udinese and then Lecce, before settling in Florence, where he’d become a key member of Vincenzo Montella’s exciting Fiorentina side. Even the defensive players, Zapata, Zuniga and captain Yepes, had several years experience playing for top clubs in Serie A. 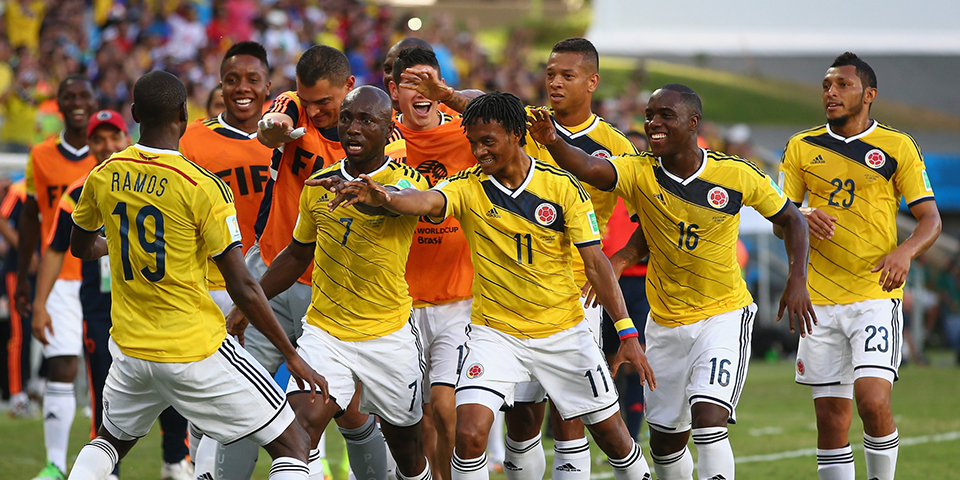 Colombia’s most promising talent was their young number ten, James Rodriguez. The midfielder had also joined Porto as a teenager, before following Falcao to Monaco. At twenty-two, Rodriguez was already considered one of South American football’s top prospects, having been nominated as the successor to Colombian legend Carlos Valderrama — by none other than Valderrama himself. 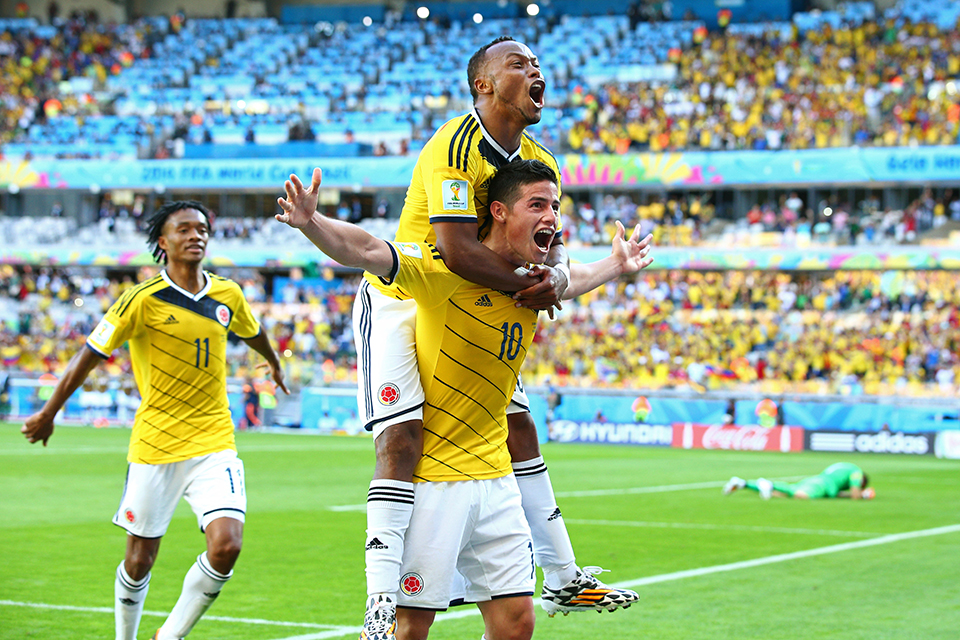 The man handed the task of harnessing all this creative talent was the Argentina José Pekerman, who’d led his own country to the quarter-finals of the World Cup in 2006. Colombia had finished behind Argentina in qualifiying, yet found themselves among the eight seeded teams for the World Cup draw. Consequently, they were joined in their first round group by Greece, Ivory Coast and Japan. On paper it looked a relatively easy proposition, but fans were wary of suffering a repeat of 1994, when Colombia had been tipped by Pelé to win the competition, only to lose their first two games and suffer a humiliating (and ultimately tragic) exit. 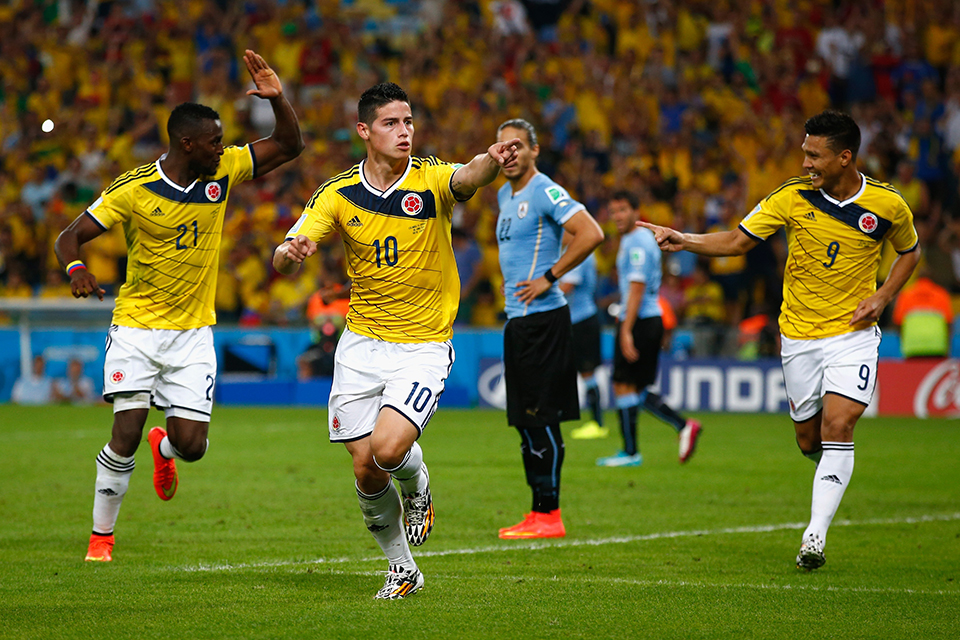 Fortunately, 2014 would prove a far more joyous tournament. Colombia won all three of their group games, scoring nine goals in the process and impressed audiences with their skillful attack-minded football, not to mention carefree celebrations. James Rodriguez lived up to his potential early on, finding the net in every match, but truly fulfilled his promise in the second round against Uruguay. At Rio’s Maracana, this all-South American clash was Colombia’s sternest test yet, but Rodriguez had found his form at just the right time. For his first goal, he controlled the ball with his chest before volleying into the top corner from outside the box. It was undoubtedly one of the goals of the tournament, and recalled that of another Rodriguez — Maxi — for Pekerman’s Argentina against Mexico in 2006. 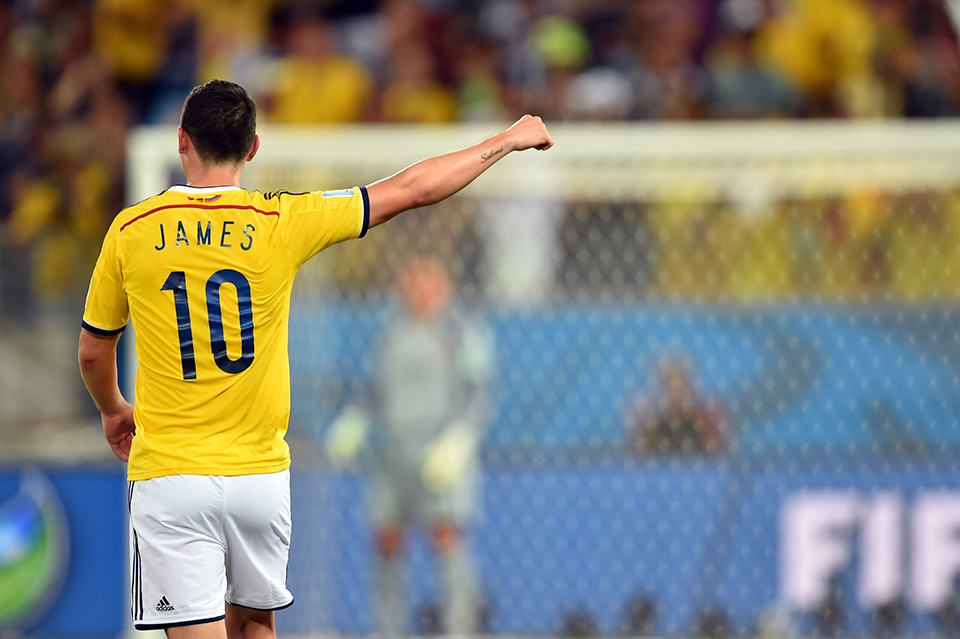 In the second half Rodriguez doubled his side’s lead with a tapped in finish from close range. Neutral followers were delighted to see Colombia progress at the expense of Uruguay, who’d won few friends for their performances or behaviour in Brazil. Now Rodriguez and Co. faced the hosts in Fortaleza, who themselves could be considered fortunate to have got through their second round tie with Chile. For the first time, Colombia were forced to wear their red and navy away strip, a change with which their entertaining World Cup run came to an end. Two goals by central defenders (Thiago Silva and David Luiz) settled the contest, but Rodriguez still found time to get his sixth goal of the tournament from the penalty spot, thus maintaining his record of scoring in every game and ultimately earning him the Golden Boot. Though the match was overshadowed by Zuniga’s foul on Neymar which ended the youngster’s World Cup, at full-time Rodriguez was consoled by his opponents and applauded for his fine performances in Brazil. 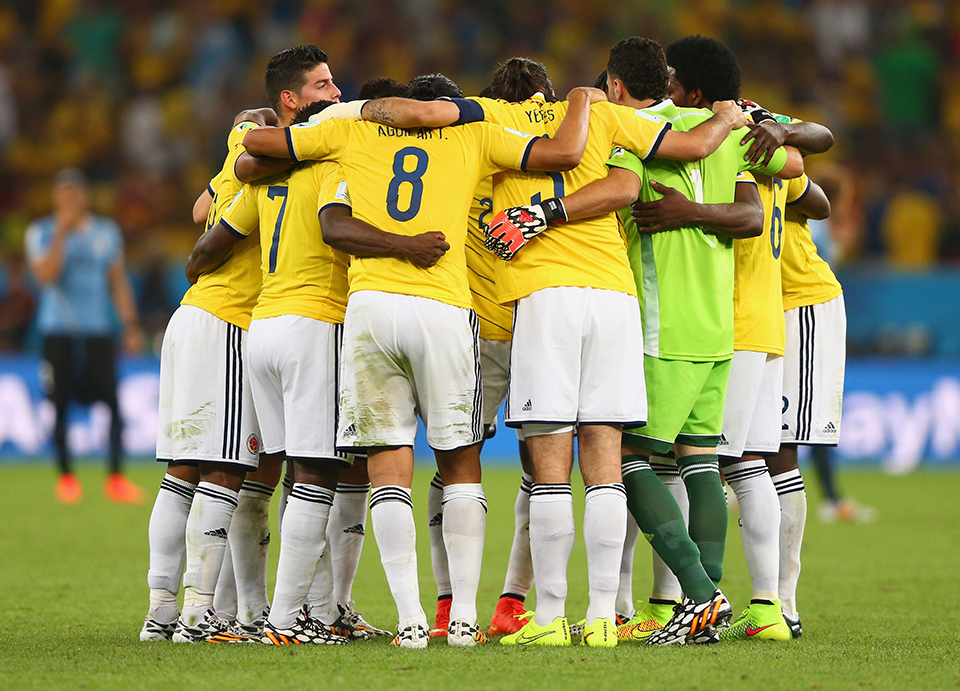 Colombia’s wholly enjoyable displays in Brazil coincided with an unprecedented new kit. Unlike most national teams, Colombia have changed their home colours with unusual frequency. Between the 1930s and 1980s the team sported sky blue, white, navy, orange and red shirts before finally settling on the current yellow in the early 1990s. In 2014 adidas unveiled a new shirt with a navy diagonal sash, into whose design was incorporated a sombrero vueltiao, the traditional hat of Colombia and one of the symbols of the country. The new kit also saw the abandonment of the traditional tricolore strip, Colombia instead reverting to white shorts and socks. Oddest of all was the inclusion of a hashtag — #UnidosPorUnPais — located on the back of the shirt just below the neck. While team slogans and motifs have been incorporated surreptitously onto shirts for a few years, this was the first instance I’ve seen of social media directly infiltrating kit design. Having finally witnessed a player excel at the World Cup with my own name on his back, naturally I couldn’t resist picking up a yellow “JAMES” shirt to add to my own collection. 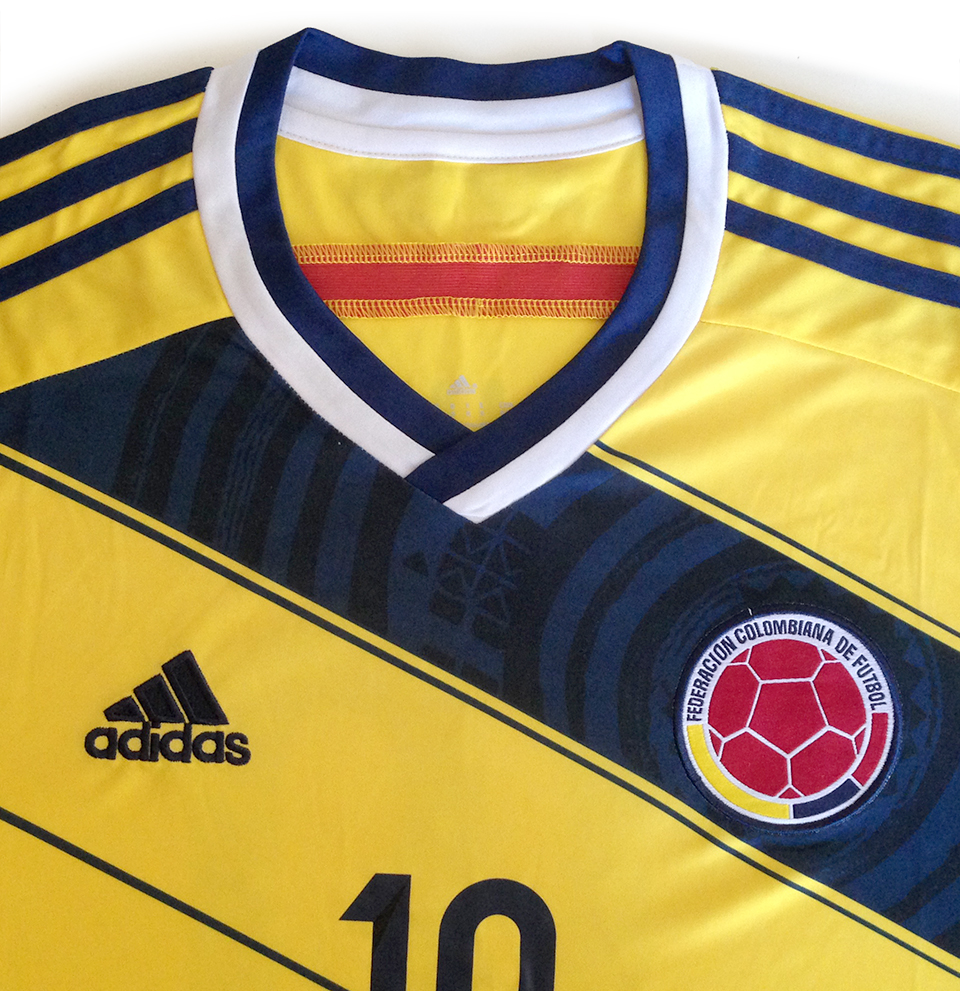 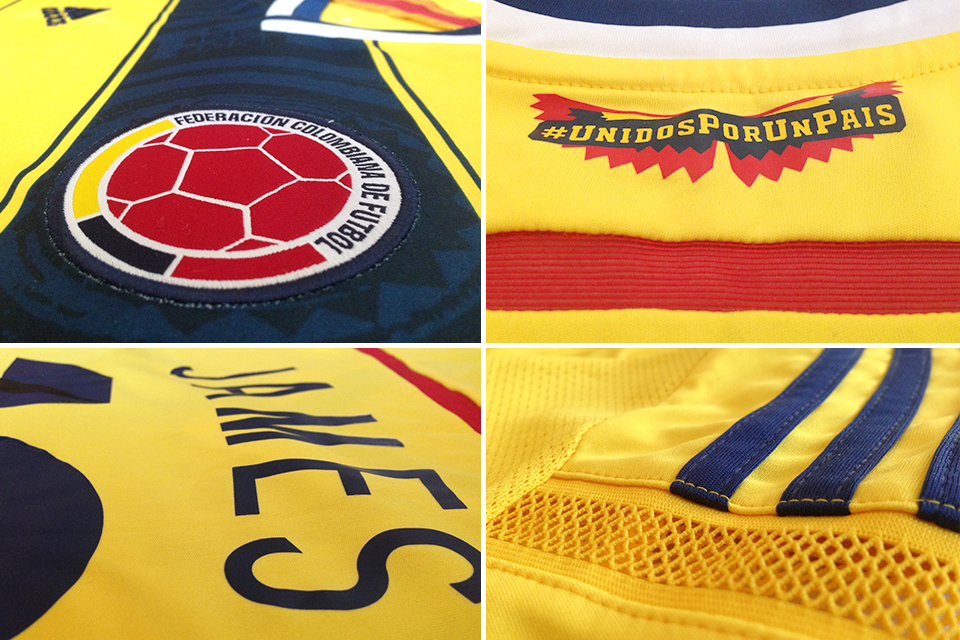