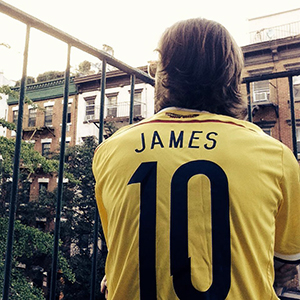 I’ve loved football shirts for almost as long as I’ve loved football. As a child they’re one of the first things you notice about the game, before you can follow tactics, recognise players or are even aware of which two teams are playing. One of my earliest footballing memories is of Argentina’s albiceleste striped shirts at the 1986 World Cup in Mexico, though I barely recall watching any of the actual matches. Indeed, we remember some shirts because of the successful sides that wore them. Some ugly kits are recalled fondly due to their association with a team’s winning performance (see Holland ’88), while similarly many beautiful designs are forgotten for the opposite reason.

Why people buy and wear football shirts is harder to explain. A lot of people collect shirts of their favourite team, accumulating a vast collection of shirts the same colour. I would say I became a football fan before I became a fan of the teams I support today. As a youngster I appreciated the designs of certain shirts over others, just as I felt drawn to certain teams. But I imagine my main incentive stemmed from a basic footballing fantasy, and the realisation that without a special gift for the game, that was probably as close as I was ever going to get. Wearing a shirt in your home, you soon learn that without the stadium crowd, floodlights or opponents, it’s just another piece of cheap polyester, but that never stopped me from wanting to emulate my footballing idols only seen on television and in magazines. I’ll readily admit that my reasons for collecting football shirts as an adult aren’t much different.

Not just a symbol of one’s sporting allegiance, a football shirt can also convey one’s town or country of origin, political leanings, social standing and even footballing culture. Those who don’t like football can send similar messages by wearing the t-shirt of their favourite band (the more obscure the better) to flaunt their taste in music and lifestyle. But while a football fan can show a degree of superiority by sporting a rare vintage away shirt (preferably from a foreign country), the football shirt itself defies ironic appreciation. It is worn out of love for the team, the shirt, or — more likely — both.

Football shirts weren’t always such a topic of interest. Changes to football strips were once rare, and even when variations did become more frequent, the kits themselves only ever remained utilitarian sportswear. Two significant factors began to change that in the 1990s. The first was the explosion of the replica shirt market, as it slowly dawned on clubs that by releasing a new kit at the start of every season they could cash in on the football fan’s greatest weakness: an eternal sense of optimism. Simultaneously, changes in the perception of the game — by fans and non-fans alike — coincided with the emergence of a football nostalgia culture, and a reappraisal of what had gone before and what was being rapidly lost.

This shift in attitude has seen old football kits elevated to modern-day cult status, resulting in expensive (if not always accurate) reissues of so-called classics. Although any true football shirt aficionado can spot the difference, such kits are the ideal choice for fans wishing to disassociate themselves from the commercial frenzy of modern football. And in existing purely as a reference to the past, retro kits will never be out of date, due to the simple fact that they already are. Towards the turn of the millennium this phenomenon extended from the stands to the design studio, as kit manufacturers looked to past designs for inspiration. Today it is rare that a team releases a shirt that does not in some way reference a previous strip.

Though I didn’t know it at the time, I began collecting shirts twenty-four years ago. Since then I’ve probably bought on average about two a year. This doesn’t sound like many for a self-proclaimed collector, but I’ve never been interested in hoarding shirts or amassing the biggest collection possible. I’ve only ever bought shirts that I really liked — after all, how can I justify the expense if I’m not going to wear the thing? For this same reason I try to only buy shirts in my correct size. Nowadays it’s quite rare even that I splurge on shirts at the time of their release, preferring instead to apply the retro kit method and wait a few years. This way I get to avoid the risk of liking next season’s shirt more than the one I just bought.

Such a luxury wasn’t available a few years ago, when shirts became obsolete as soon as their replacements arrived in stores. Now eBay and several sites specializing in the sale of vintage football kits have made classic designs that had appeared lost forever available once more, albeit in scarce supplies and scattered around the globe. Collecting football shirts (or anything else probably) requires a relentless focus and the utmost patience, virtues that tend to be ultimately rewarded. There are some shirts in my collection that I’d coveted for twenty years before I finally got my hands on them.

There are several good football shirt sites, but most of these fall into one of two categories: football design blogs in which kit nerds discuss the latest shirts, or extensive personal collections catalogued with only perfunctory accompanying information. With Shirt Tales I wanted to combine both of these styles, by giving myself a platform not only to illustrate my collection online, but also to write about each shirt within the context of football history and design. As you can see the site is far from complete, but I’m continuously updating it and will be adding more content very soon.

Hope you enjoy it and thanks for reading!