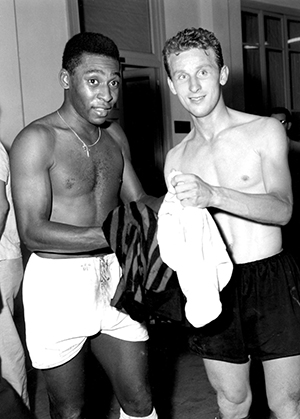 Pelé exchanges shirts with Giovanni Trapattoni following the first leg of the Intercontinental Cup Final between Santos and Milan at San Siro — October 16, 1963.

Since launching this site I’ve fielded a number of questions on the subject of football shirts. So to save everyone some time I thought I’d answer the most frequently-asked here.

When did you start collecting shirts?
I suppose my collection began with my first shirt, but I didn’t consider myself a “collector” until more recently, when the internet opened up the possibility of obtaining shirts from the past.

Where do you buy your shirts?
There are many sites specialising in the sale of vintage kits, but they can be pricey as the shirts are generally in near-mint condition. Ebay is really the best source, though it can take years to find what you’re looking for.

Are you able to buy shirts in New York?
The only shirt I’ve bought here was my Fluminense 1992-93 shirt, which I found quite unexpectedly at the Cure Thrift Shop on East 12th Street a few years ago. In addition to the adidas store and NikeTown there is also a specialist soccer store on the corner of Amsterdam Avenue and West 94th Street.

Is there a football shirt culture in NYC?
There are a lot of football fans in New York, and I see people in football shirts on the street every day as you would in most cities. But since there isn’t a strong affinity between the city and its local teams, it’s more common to see shirts from other parts of the world. Just last week I spotted a Napoli 3rd shirt (the camouflage one) and a River Plate away shirt. There’s a guy who walks up and down Sixth Avenue wearing an Argentina 1996 shirt underneath a sandwich board advertising a nail salon.

Is it acceptable to wear a football shirt in public?
Yes (though some shirts are more acceptable than others).

Is it cheating to buy modern reproductions of classic kits?
No, not if the original is exceedingly scarce or prohibitively expensive. It’s the sentiment that counts.

What do you dislike about modern football kits?
The clutter of sleeve patches and multiple sponsors down the sleeves and underneath the numbers. But more than that I hate how modern shirts change so often. Besides the obvious exploitation of fans, the worse consequence of this is that it encourages a veering from tradition, since designers have to come up with something new and (to an extent) different every year. It’s impossible for kits to achieve iconic status these days because they’re only around for one season, so they become literally disposable.

What do you like about modern football kits?
I prefer the clean designs of current shirts compared to some of the wacky graphics we were subjected to in the nineties. Football shirts also got a little too roomy for a while. The slimmer fit of modern kits is more flattering for athletic figures.

Are your shirts for sale?
Most of my collection has sentimental value and I don’t plan on parting with it. But occasionally I have a few shirts for sale here.

What is your all-time favourite shirt?
It’s impossible to choose a favourite, but the ones that spring to mind are the classics from my childhood: the Italy Diadora shirts, the Brazil Topper shirts, the Barcelona Meyba shirts, the Milan Mediolanum shirts… But of course it was easier to fall in love with shirts when they changed less often.

Have you ever considered designing football kits?
Yes, this is something I used to do when I was younger, and I still like to imagine the perfect kit for particular teams. I know several talented people who do great work creating new kit concepts. Personally I don’t usually act on those ideas because my ideas would probably just be modern updates of kits that already once existed. And it’s pointless trying to improve on the classics.