Having devoted a vast portion of my waking (and non-waking) life to football I’ve become pretty good at identifying football shirts and ascertaining their date and provenance. Yet even with the wonders of the internet at my disposal and several bona fide experts on the case, I have yet to establish the precise origin of this rare Brazil shirt.

It was given to me in the summer of 1991 by an Italian teenager whom I hadn’t met until the evening his father, Dr. Consoli, a well-appointed local surgeon, took me and my family out for dinner at a remote restaurant in the Tuscan hills. It was one of those hidden places that can only be reached by a seemingly endless drive along dark and winding country roads, but then you finally enter to find the joint bustling with locals and the requisite display of Fiorentina posters plastered all over the walls. Anyway, after a typically rustic blow-out we returned into town to the Consoli family’s villa in Scarperia. The doctor’s two teenage sons, Lorenzo and Giacomo, were more than happy to show me and my younger brother their impressive collection of shirts, the jewel of which hung on Lorenzo’s bedroom wall. I instantly recognised it as a white number 20 Italy shirt from the early ’80s, but my jaw must have hit the floor when Lorenzo quickly confirmed that it was indeed the shirt worn by Paolo Rossi against Cameroon in the 1982 World Cup. I was too much in awe to ask how he’d got hold of it, but evidently Dr. Consoli had friends in very high places.

Paolo Rossi photographed shortly after Italy’s 1-1 draw with Cameroon in Vigo on June 23rd, 1982. The Juventus striker has clearly just swapped shirts with an opponent — how his shirt later found its way onto an Italian teenager’s bedroom wall remains a mystery.

In recognition of my knowledge and enthusiasm, Lorenzo kindly offered me the adidas Brazil shirt reproduced in the photographs on this page. Though Brazil had worn an adidas kit at the 1978 World Cup, I knew this not to be a conventional Brazil shirt, which in 1991 had been manufactured by Topper for a decade. I also knew that adidas had produced the Brazilian football team’s kit at the last two Olympic Games, where in lieu of being able to use the CBF badge the shirt had instead featured the word “BRASIL” emblazoned across the chest. But without much means of further research, and my Italian not what it is now, I simply thanked Lorenzo for the lovely gift and we went downstairs to the kitchen to watch the Copa América match between Colombia and Uruguay that had just kicked off. That’s my last memory of the evening — I wore my new mystery Brazil shirt a lot during the rest of the summer and the one that followed, then sometime later I lost track of it.

I only came across it again this summer while visiting my parents in England, after my mum found it at the bottom of a drawer somewhere. To my surprise it now fits me better than ever, and so I brought it back with me to New York. Since then I’ve recommenced — or rather, commenced — my research, for which I am now aided by the endless supply of online information. I first checked for images of the Brazil teams at the 1984 and 1988 Olympic Games. The shirts used in Los Angeles and Seoul were each made by adidas, and both featured the “BRASIL” lettering, but neither matched the shirt I had in my possession. I then wondered if it might be older than I had believed. Brazil did not compete in the Moscow games in 1980, and though my shirt doesn’t seem that old, I went back even further to 1976. As I suspected the kit worn in Montreal, while differing from the CBF strip of the period, bears even less resemblance to the shirt in question. 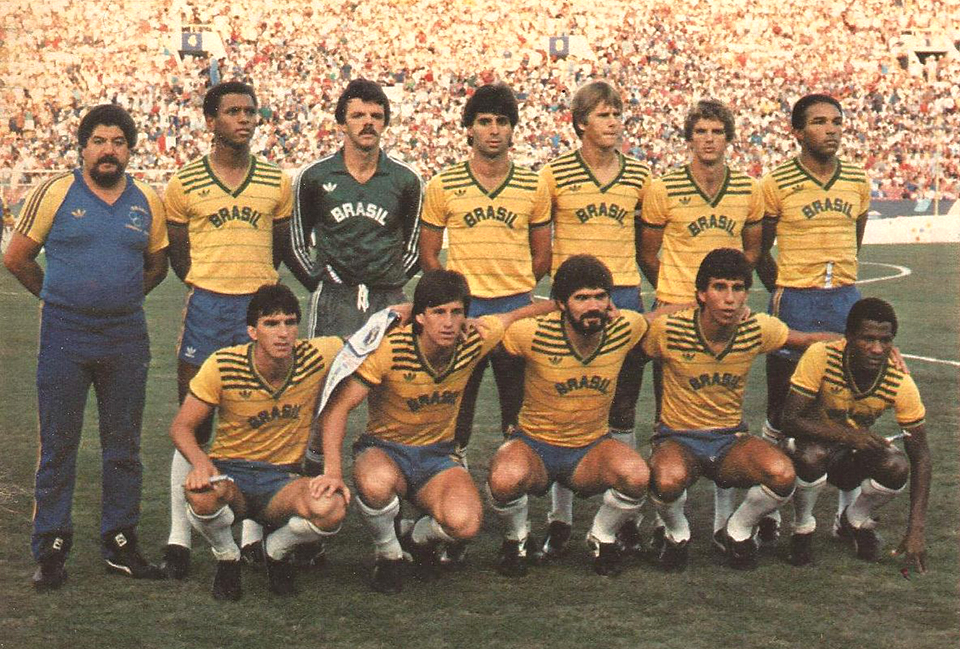 Digging a little deeper I felt I was getting warmer when I learned of an event known as the Pan-American Games, held every four years the year before the Olympics. After viewing several fuzzy YouTube videos of dubious source I am sadly no closer to a definitive answer. At the 1987 edition held in Indianapolis Brazil won the competition wearing the same shirts used at the ’84 Olympics. Four years earlier in Caracas they’d finished runners-up wearing a kit that appears to be a hybrid between their regular Topper strip and the shirts used in 1976. I have so far been unable to find any photographic or video evidence of Brazil’s games at the 1979 tournament in San Juan. 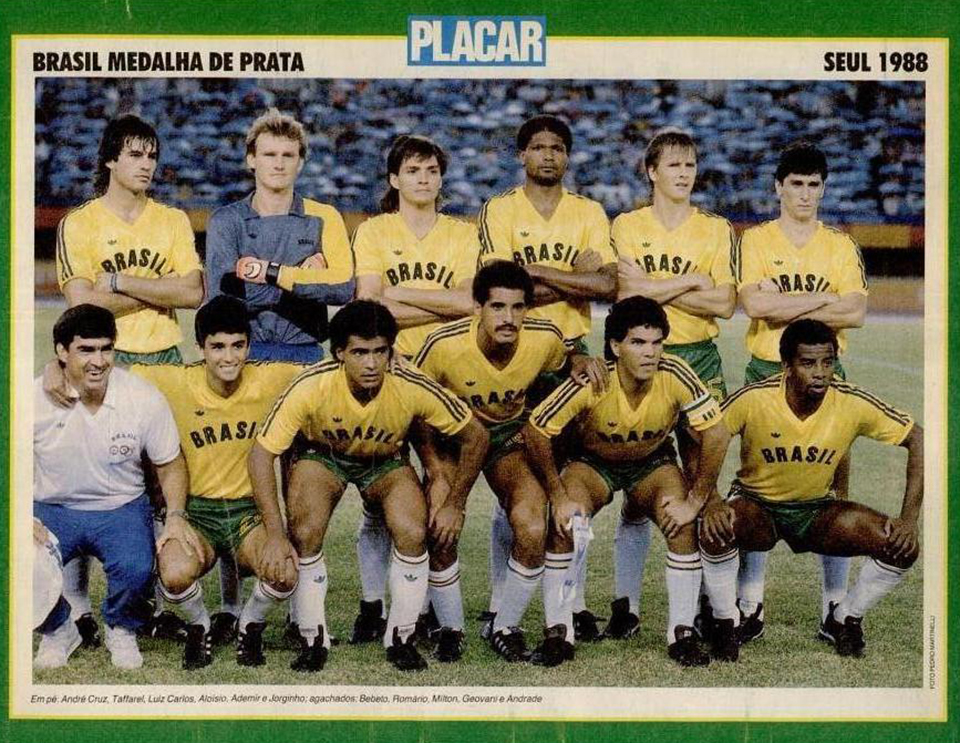 Having exhausted all my leads I decided it was time to seek outside help. I contacted John Devlin, Scottish football shirt expert and author of True Colours, but he could provide no further information. I also wrote to São Paulo-based kit nerd Evaldo Rui Oliveira Junior, who digitally reproduces historic football kits in meticulous detail on his site Erojkit. He agreed that the shirt was from the 1980s, but suggested it was released purely for commercial purposes, and never used in an actual match. I even submitted it to Old Football Shirts, an online photographic football shirt archive, but have yet to hear any news. More recently I came across two shirts for sale online — one located in Los Angeles and another in Brasilia — each of which were remarkably similar to mine. The only real difference was that both had basic V-necks and green sleeve stripes (mine are blue). I contacted both sellers in the hope of gleaning some further insight into their respective shirt’s history, but neither shared my level of interest nor obsessive need to solve this particular puzzle. 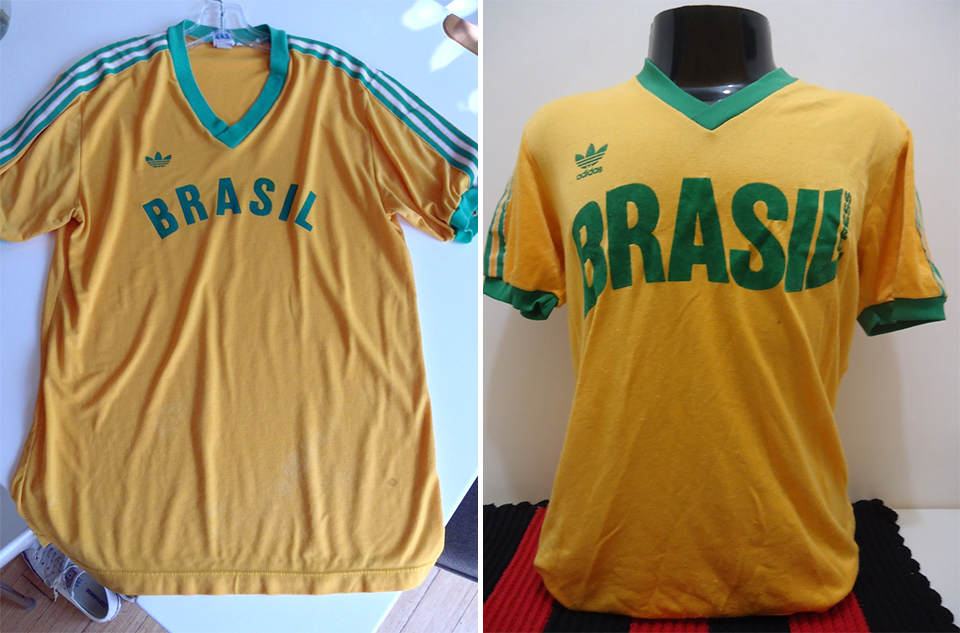 Two shirts recently spotted for sale online in Los Angeles and Brasilia. The primary differences between my shirt and the one on the left are the V-neck collar and the colour of the sleeve stripes.

So after many, many hours of detective work I am no closer to an answer than I was a few months ago — or even twenty years ago for that matter. If anybody out there cares to weigh in or offer any additional clues I would be very appreciative. In the meantime I have found Lorenzo on Facebook, so perhaps it’s time I just asked him…