When Holland won the 1988 European Championship it not only secured their first major international trophy but also ended a long period in the wilderness. The Dutch had been unlucky to lose consecutive World Cup Finals in the 1970s, but had then failed to qualify for neither the 1982 or 1986 competitions, nor the European Championships in 1984. So impressive was the victory in West Germany that much was expected of the Dutch side that arrived at the 1990 World Cup. In the interim the trio of Ruud Gullit, Marco Van Basten and Frank Rijkaard had helped make Milan the continent’s most feared club side, winning back-to-back European Cups. Unfortunately a series of managerial switches between qualification and the start of the tournament had left the squad tense, unstable and prone to internal bickering. Meanwhile, Holland’s star players failed to show their true worth. Gullit was still recovering from injury, Van Basten failed to find the net, and Rijkaard compounded a miserable tournament by getting sent off in the defeat against West Germany for spitting on Rudi Völler. 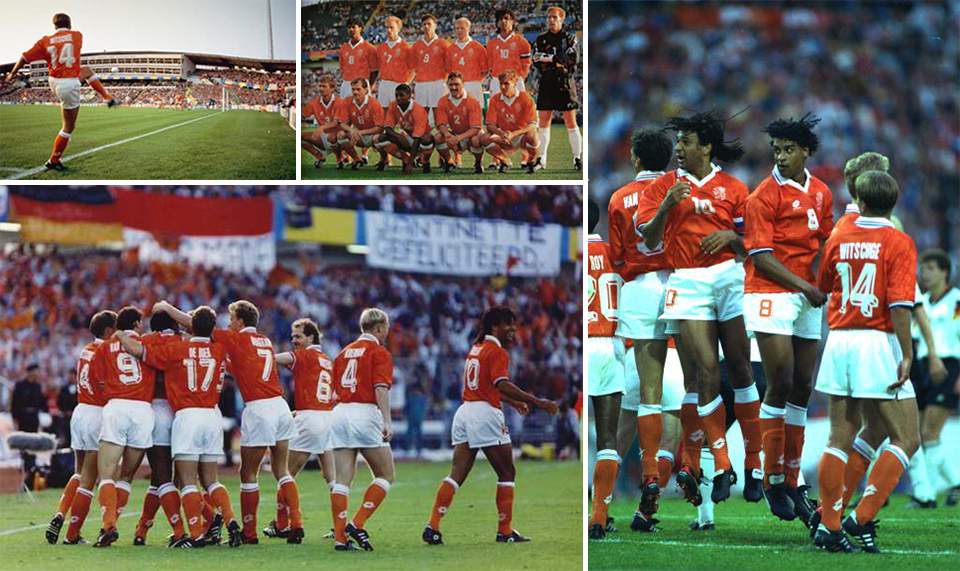 The man who had led Holland to their ’88 triumph, Rinus Michels, returned to the Dutch bench in time for the 1992 European Championships in Sweden. Michels had spent his entire playing career at Ajax, and as a coach became the truest practitioner of the Amsterdam club’s concept of “Total Football”. The philosophy’s greatest disciple on the pitch, Johan Cruyff, played under Michels at both Ajax and Barcelona, not to mention the national team that dazzled at the 1974 World Cup. By the early nineties the free-flowing nature of those sides had been reigned in, but elements of the style remained. The most noticeable difference to the Dutch side was its kit. The KNVB’s long-standing relationship with adidas had ended at the close of 1990; in a qualifier against Malta in March 1991 Holland debuted a new kit produced by Italian company Lotto. The shirt’s most marked characteristic was a unique pen-effect pattern woven into the fabric that echoed the brand’s logo. The white collar and cuffs featured a red-white-and-blue tri-colour trim in the style of the now familiar Italy shirt. Even the 3D numbers were the same as those worn by the Azzurri. It’s also worth noting that this was the first major senior tournament to incorporate front numbers and names on the back of shirts. Although only one member each of the three Dutch sets of soccer-playing brothers — Koeman, Witschge and De Boer — made the Holland squad, the initiative did prove handy in helping to distinguish between mustachioed defenders Van Tiggelen and Van Aerle (not to mention the various Anderssons and Nielsens in the Sweden team). 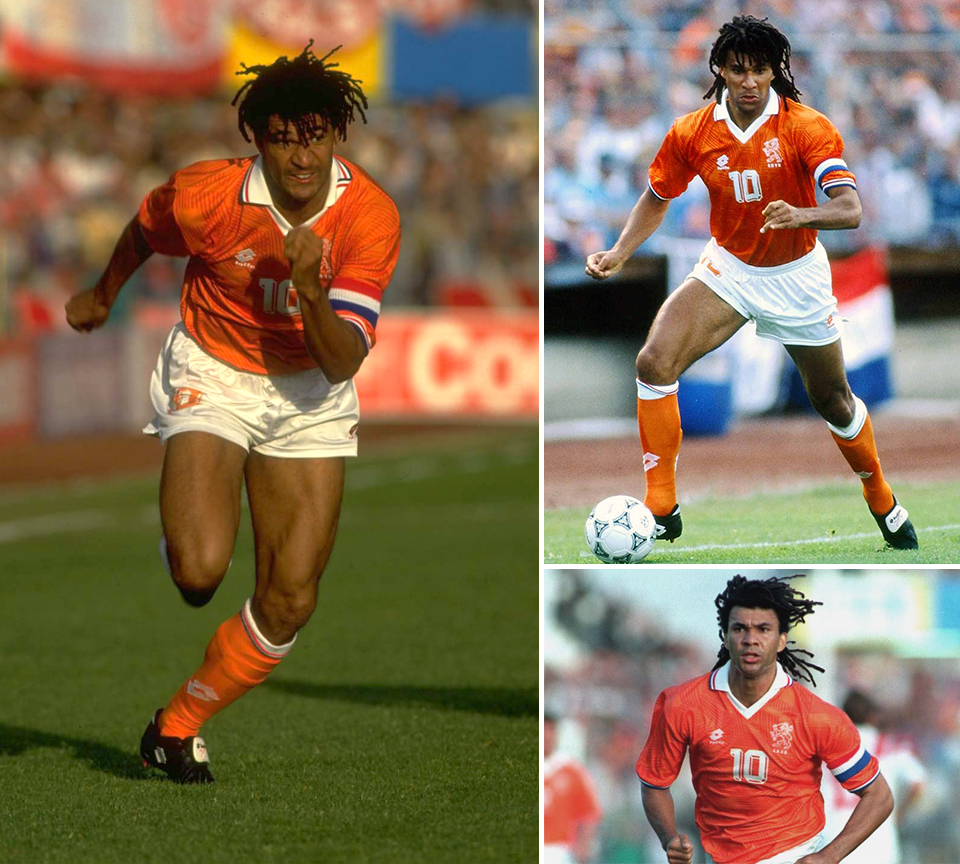 Michels selected twelve players from his successful ’88 squad, the same twelve that had also gone to Italia ’90. This experienced group provided the backbone of the Holland side that attempted to defend their title. Two young additions to the team were elegant forward Dennis Bergkamp and winger Bryan Roy, both from Ajax. It was Bergkamp who made his mark early on the tournament, scoring the only goal of Holland’s first match against Scotland. A goalless draw against the CIS (a provisional post-Soviet national team following the break-up of the USSR) was enough to see the Dutch through to the semi-finals, but there remained the small matter of a grudge match against Germany. A late Van Basten goal had beaten the West Germans in the ’88 semi-final in Stuttgart; two years later West Germany had knocked Holland out of the World Cup in Milan. Now they met for the third tournament running in Gothenburg, where the Dutch sailed into an early two-goal lead through a Rijkaard header and a low drive by Feyenoord’s Rob Witschge. Jürgen Klinsmann pulled a goal back after the interval but Bergkamp scored his second headed goal of the tournament to seal a memorable 3-1 win.

In their semi-final Holland faced surprise package (and eventual tournament winners) Denmark, who were only competing in Sweden due to war-torn Yugoslavia’s late disqualification. Bergkamp and Rijkaard were again on hand to respond to Henrik Larsen’s double strike, forcing the game into extra-time and towards the inevitable shoot-out. Four years earlier Dutch goalkeeper Hans Van Breukelen had saved from Benfica’s final penalty to win the European Cup for PSV Eindhoven. But this time it was his opposite number Peter Schmeichel who stopped the decisive kick, from the right foot of Van Basten no less. It was a sad end to another disappointing tournament for the striker. A textbook volley that crashed against the German crossbar proved to be the only glimpse of the devastating form he’d shown in 1988. 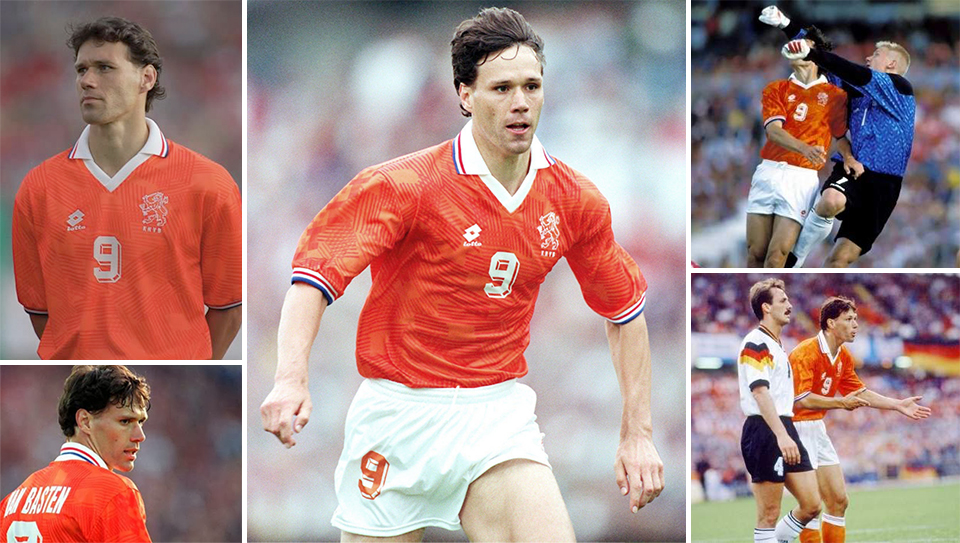 I didn’t wear my Holland shirt at Wembley the night the Dutch visited England for a World Cup qualifier. Though I was delighted to see two of my idols, Gullit and Rijkaard, in the flesh, I was still not over the disappointment of discovering that Van Basten had been ruled out of the game due to an ankle injury — one from which he never recovered. The striker did return In May to play a couple more games for Milan, including the European Cup Final defeat to Marseille which proved to be his final professional appearance. After conceding two early goals — the first an expertly taken free-kick by John Barnes after a few seconds — Bergkamp got one back at the other end, deftly lobbing Chris Woods in the England goal. Late in the second half pacy central defender Des Walker for once struggled to keep up with his opponent, and was compelled to bring down 20-year-old Ajax winger Marc Overmars inside the box. Subsitute Peter Van Vossen converted the kick to earn the Dutch a point. 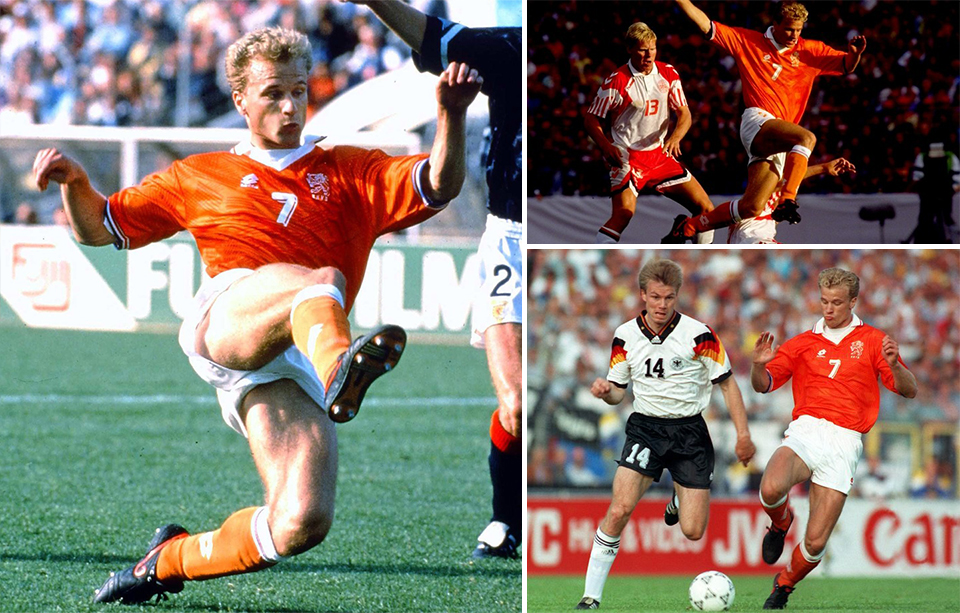 Surprisingly, Norway were proving the strongest side in the group. Having lost in Oslo earlier in the summer, England could now not afford to lose their return match against the Dutch in Rotterdam the following October. But lose they did, prompting Graham Taylor’s infamous “Do I not like that” remark. Holland sealed the points with two goals in quick succession, the first a cleverly chipped free-kick from Koeman. English fans argued that the defender should have already received a red card for a professional foul on Platt. Bergkamp headed a second a few minutes later, and England’s hopes of qualifying for USA ’94 were effectively over. 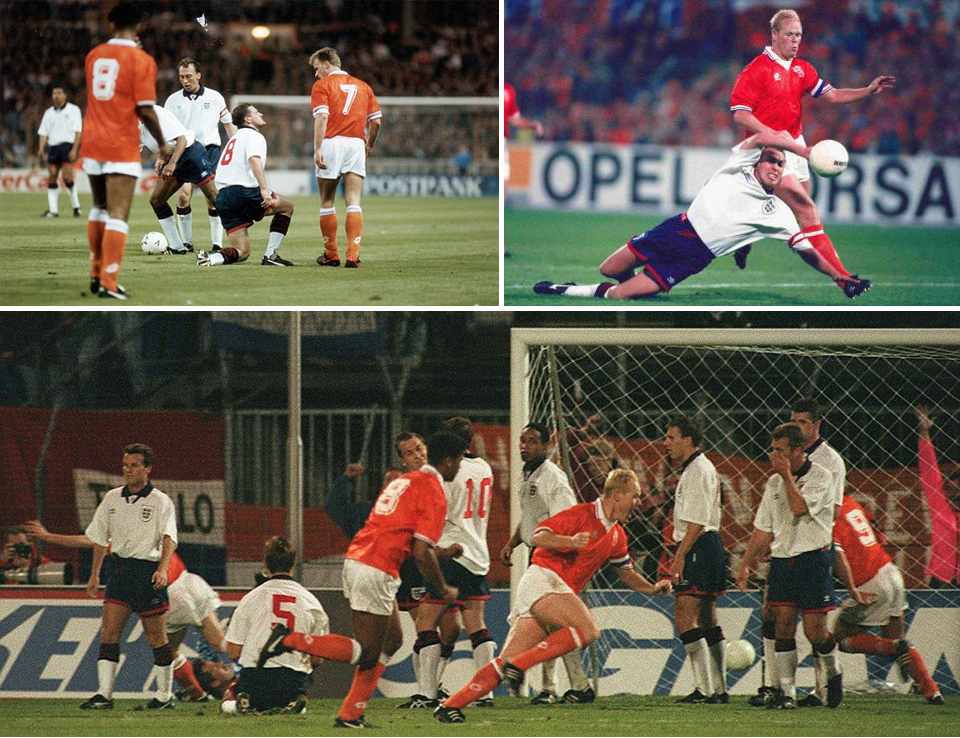 At the 1994 World Cup the Dutch wore an almost identical shirt, the only changes being the shirt’s background pattern (that now featured a repeated KNVB crest) and the replacement of the 3D numbers with a more conventional flat white font. The team were already without Van Basten, who hadn’t played since May ’93, and on the eve of the tournament lost Gullit, who after a long-running feud with coach Dick Advocaat stormed out of a training session. Neither player would ever play for his country again. So Rijkaard was one of only four players from the ’88 squad still involved with the national team. In the stifling heat of Orlando the Dutch stuttered through their group: a defeat against neighbours Belgium was sandwiched between two narrow victories over Saudi Arabia and Morocco. Yet somehow they finished on top having scored more goals against their direct rivals. The speed of Bergkamp and Overmars made easy work of an exhausted Ireland in the second round, but in the quarter-final in Dallas the Dutch succumbed 3-2 to eventual winners Brazil. 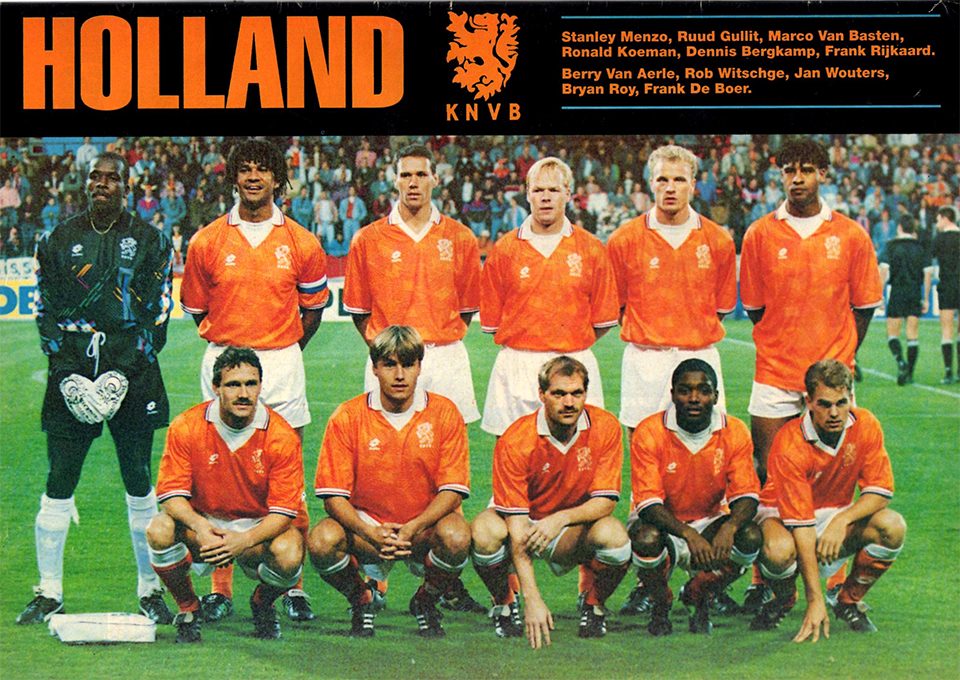 Holland’s second goal in that defeat was scored by Aron Winter. With Rijkaard, Koeman and Wouters having all retired from international football after the World Cup, the Lazio midfielder remained the only survivor from 1988 included in Guus Hiddink’s squad for the 1996 European Championships. For the tournament in England Holland’s Lotto shirt underwent further modifications. A button-up collar was added, while the tricolour trim became a broken stripe resembling something akin to morse code. The shirt fabric incorporated the image of Dutch players celebrating a goal at USA ’94. On the pitch Holland struggled again, drawing 0-0 with Scotland and beating Switzerland. Only a late Patrick Kluivert consolation goal in a 4-1 defeat against the hosts saw them through the group on goals scored. In the quarter-finals they lost to France on penalties after another goalless draw.

Euro ’96 was the last tournament in which the Dutch wore Lotto. For the 1998 World Cup in France they had struck a deal with Nike, whose uniforms they have worn ever since. Winter remained a part of the international fold for that tournament and was even selected for the one that followed — Euro 2000, which Holland co-hosted — by old teammate Frank Rijkaard, who was now in charge. Several of Holland’s Nike shirts have made great use of black as a secondary colour (which was totally absent from all the Lotto kits), presumably in an attempt to reference past glories. But none have inspired the team to a second international success, just as I have yet to be compelled to add any of them to my collection. Personally I thought the 1988 kit was hideous at the time, an opinion which has not changed despite its recent new-found status of cult favourite (a case of a lousy shirt being elevated alongside a winning team). I much preferred the clean kit worn at Italia ’90 and the Italian style Lotto strip sported at Sweden ’92. That was also the last time Gullit, Rijkaard and Van Basten played together, and the last time I genuinely enjoyed watching the Dutch — none of which can be a total coincidence. 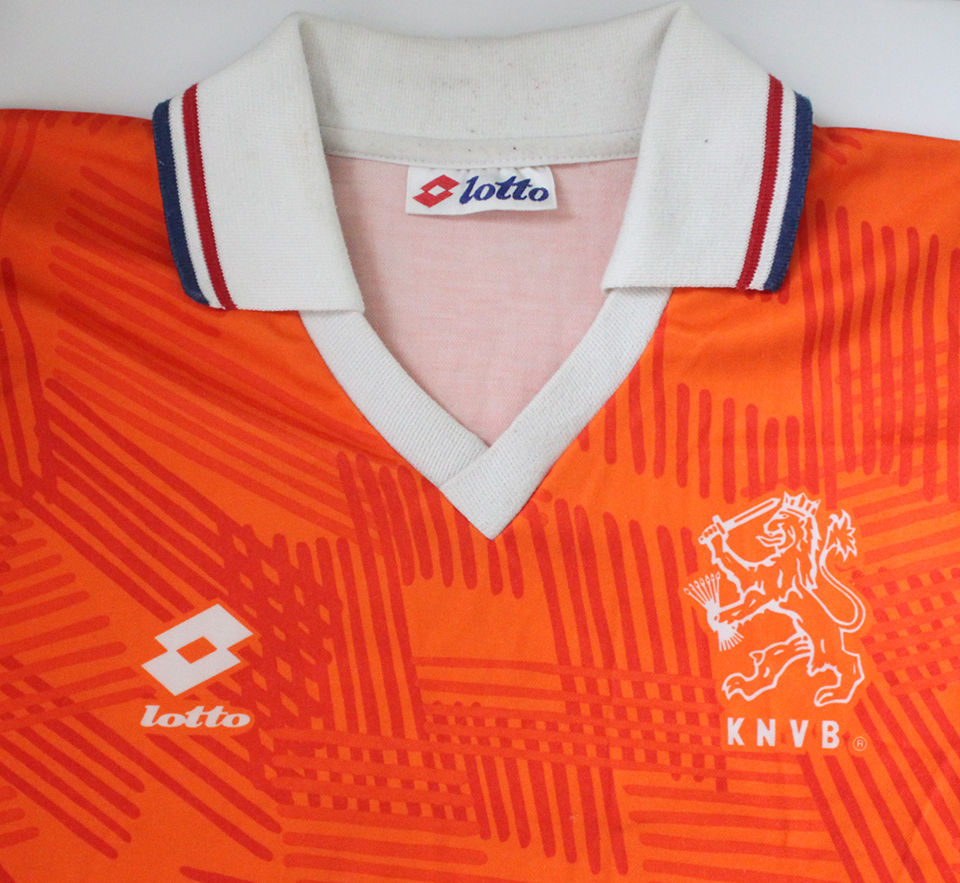 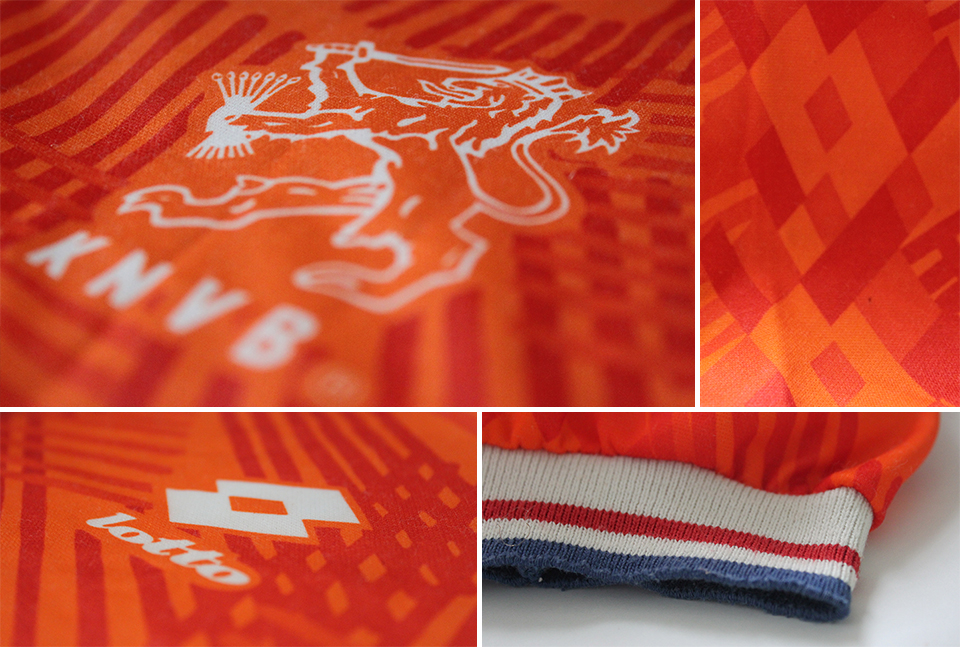