By the early 1990s the Italian national team had reached something of a turning point. While it had been an undeniably positive performance, the host nation had been disappointed with its third place finish at Italia ’90, a result from which they struggled to recover, failing to qualify for the 1992 European Championships. This crisis on the pitch perhaps provoked the most significant changes to the Azzurri kit in over a decade. That summer the FIGC unveiled a new logo, a somewhat contrived design involving a tilted rectangle and circle that awkwardly formed to create a lowercase “I”, though to most observers the device was barely apparent. The new badge was debuted with a new Diadora shirt in the summer of 1992, a design which was then further enhanced upon for the 1994 World Cup. Arrigo Sacchi’s Italy wore the new shirt for the first time in a qualifier for the tournament in late 1993 against Scotland in Rome. While still the same Azzurri blue as ever, the new logo was now interwoven into the fabric itself, creating a bizarre blue-on-blue outsized polka dot effect. 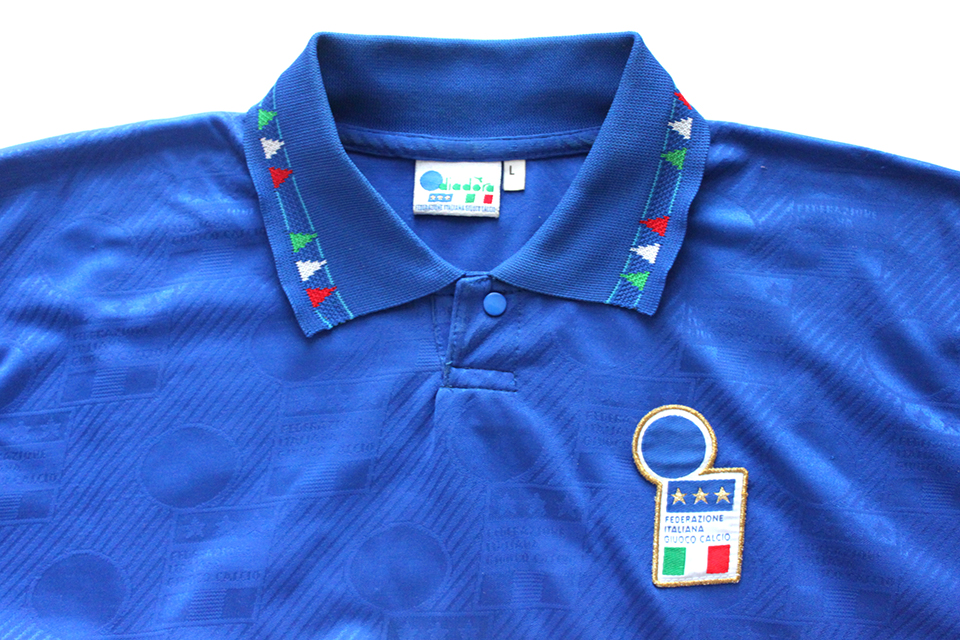 Gone were the classic tricolore striped trim which had adorned the collar and cuffs since Italy’s World Cup triumph of 1982. In their place were a series of green-white-and-red triangles, further evidence of Diadora’s new-found fixation with geometric shapes. On early versions of the shirt the triple triangle device even featured on the shirt numbers, which represented perhaps the biggest departure of all. The 3D characters which had been commonplace for much of the decade were ditched in favour of a rounded, italicized design. A similar typeface itself had been sported by the Danish national side for some time, yet in Italy’s case it came with a dark grey shadow. The new kit certainly raised eyebrows at the time of its release, though soon gained acceptance not least due to Italy’s memorable tournament in the USA. I purchased mine in April 1994 from Casa dello Sport, an extremely well-curated shop on Florence’s Via Tosinghi that carried every shirt in Serie A and B plus most international jerseys too from across Europe and South America. The entrance was cluttered with Polaroids of celebrity visitors, including Keanu Reeves and Billy Crystal. It’s hard to imagine such a place today, when most soccer jerseys are purchased online and even the best sports stores carry only the shirts of the biggest clubs.

Later that summer Italy’s World Cup campaign got off to the worst possible start: a 1-0 defeat to the Republic of Ireland at the Giants Stadium in New Jersey. In their next game against Norway things only got worse. Goalkeeper Gianluca Pagliuca received a red card in the first half for handling outside the box. In order to bring on reserve ‘keeper Luca Marchegiani, coach Arrigo Sacchi removed Roberto Baggio, much to the amazement of the watching world — and to Baggio himself. Fortunately another Baggio, the tall midfielder Dino, was on hand to head home a winner for the ten men. Later in the game Franco Baresi’s involvement in the tournament was plunged into further jeopardy after the veteran defender hobbled off with a damaged meniscus. Sacchi had been criticised before the tournament for his squad selection. Neither the young Milan full-back Christian Panucci nor an in-form Gianluca Vialli had made the cut. Now, with the competition underway, Sacchi seemed undecided, switching back and forth between Pierluigi Casiraghi and Daniele Massaro as partners for Roberto Baggio. Meanwhile, Lazio’s Giuseppe Signori — Serie A’s capocannoniere for the last two seasons — was relegated to the left of midfield. When the Azzurri faced Mexico in their final group game in Washington, D.C., Casiraghi was replaced by Massaro at half-time. The Milan forward’s first contribution was to fire Italy into the lead just two minutes later. Marcelino Bernal equalised for the Mexicans but the 1-1 draw the RFK Stadium was enough for Italy to squeeze through to the second round in third place. 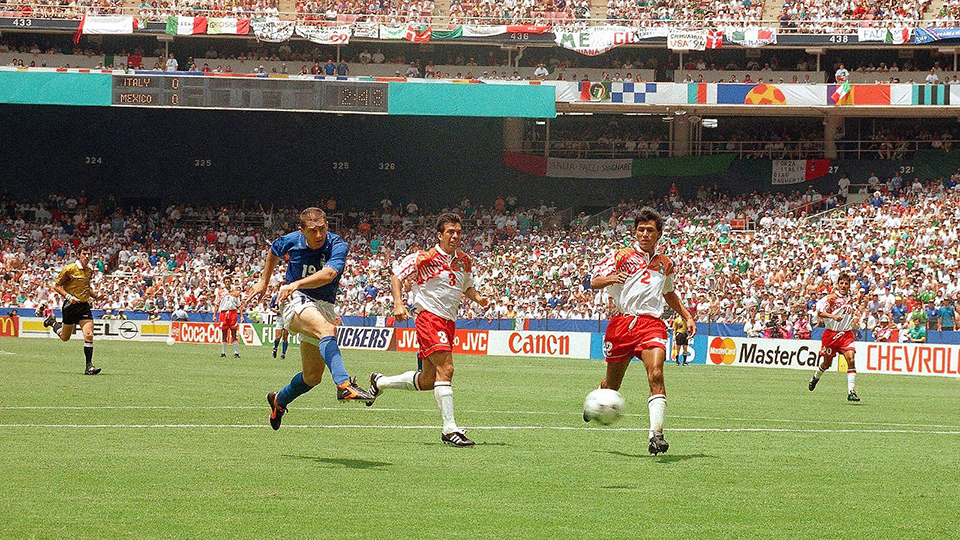 It was against Nigeria in Boston that Roberto Baggio slipped into the role of Italy’s saviour. Again playing with ten men, after Gianfranco Zola’s harsh dismissal, Italy were moments away from elimination when Il Divin Codino latched onto a ball from Roberto Mussi to slot home an equaliser with seconds to spare. In extra-time Baggio got his second — a penalty which he dispatched in off the post — to secure his side’s place in the quarter-finals. I was driving through northern Italy the day the Azzurri faced Spain, and shortly after exiting the autostrada we asked the man in the toll booth the score (he had the game on a miniature TV). “Uno-zero, Dino Baggio” he responded. Indeed Dino had opened the scoring with an unstoppable drive from distance. We arrived at a bar in Serriciolo (a place I’ve written about at greater length here) to see Spain gain the upper hand in the second half, equalising through José Caminero. Only a last-ditch save by Pagliuca (with his feet) and and a brilliant tackle by Alessandro Costacurta prevented Italy from going behind. For efficiency and to avoid confusion RAI commentator Bruno Pizzul had taken to referring to the two Baggios by their first names only, so maybe I’ll do the same here. Extra-time loomed, when Signori reached Nicola Berti’s chipped ball and lofted a pass beyond the last Spanish defender and into Roberto’s path. The Juventus forward beat Zubizarreta to the ball, took it wide of the Spanish goalkeeper and slotted home from the a tight angle under the stretching leg of Abelardo. Once again Italy had left it late, but there was still time for Mauro Tassotti to fling a vicious elbow into the face of Luis Enrique. After the game, the 34-year-old defender received a nine-match ban, effectively ending his Italy career. Had the referee spotted the incident, it would have resulted in a certain penalty for Spain. 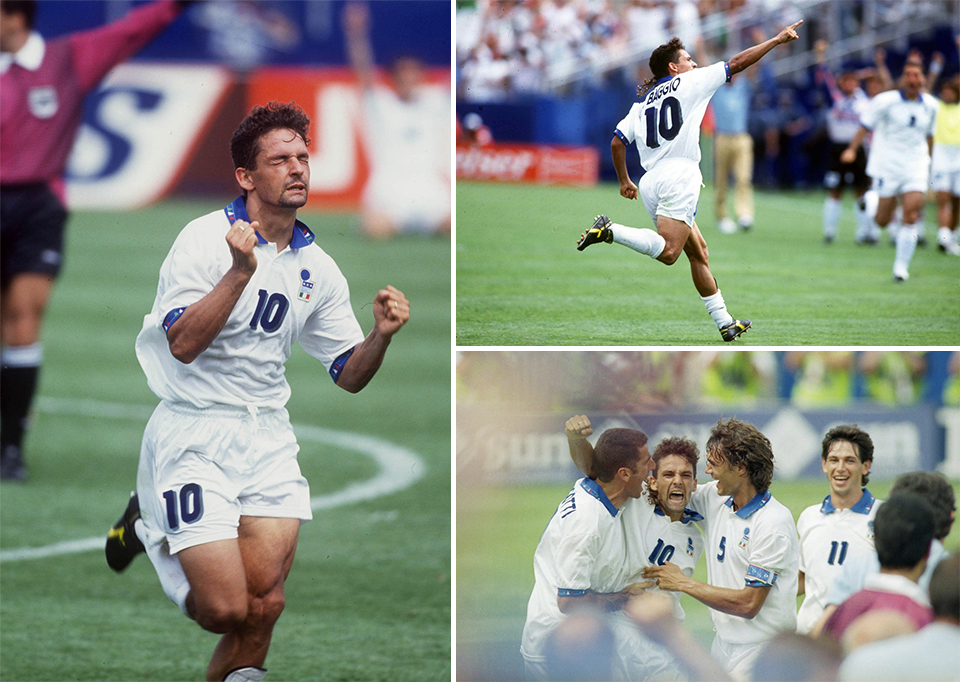 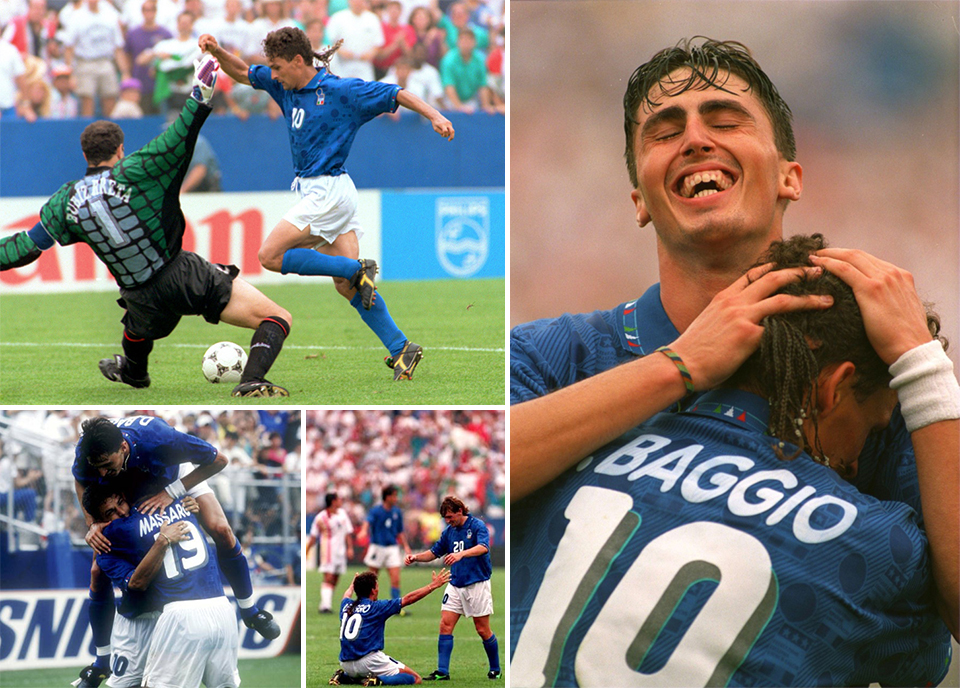 We returned to the bar for the semi-final, for which Italy returned to the Giants Stadium. Their unlikely opponents were Bulgaria, who had knocked out the holders Germany in dramatic fashion in the previous round. It was the match in which the Azzurri gave their best performance of the tournament, producing a first-half display of fluid attacking football rarely seen at such a level. What a contrast from four years earlier, when the pressure on the Italians to win at home had stifled their attacking instincts. Inevitably, Roberto opened the scoring with a beautiful solo effort, hurdling two defenders before calmly curling the ball into Boris Mikhailov’s far corner. Milan’s Demetrio Albertini was pulling all the strings in midfield, striking the post with an terrific angled shot, then seconds later prompting a fine save from Mikhailov with a deft chip. Roberto met Albertini’s dinked ball into the box from the resulting corner, and fired in a neat shot for his and Italy’s second. Bulgaria’s Hristo Stoichkov pulled a goal back — his sixth of the tournament — from the penalty spot before half-time, but Italy held on for their third consecutive 2-1 victory. But there was bad news in store for Italy: Costacurta’s yellow card ruled himself out of the final. Remarkably, Baresi — who had missed the last four games after undergoing surgery two weeks earlier — returned to the side to take his place. 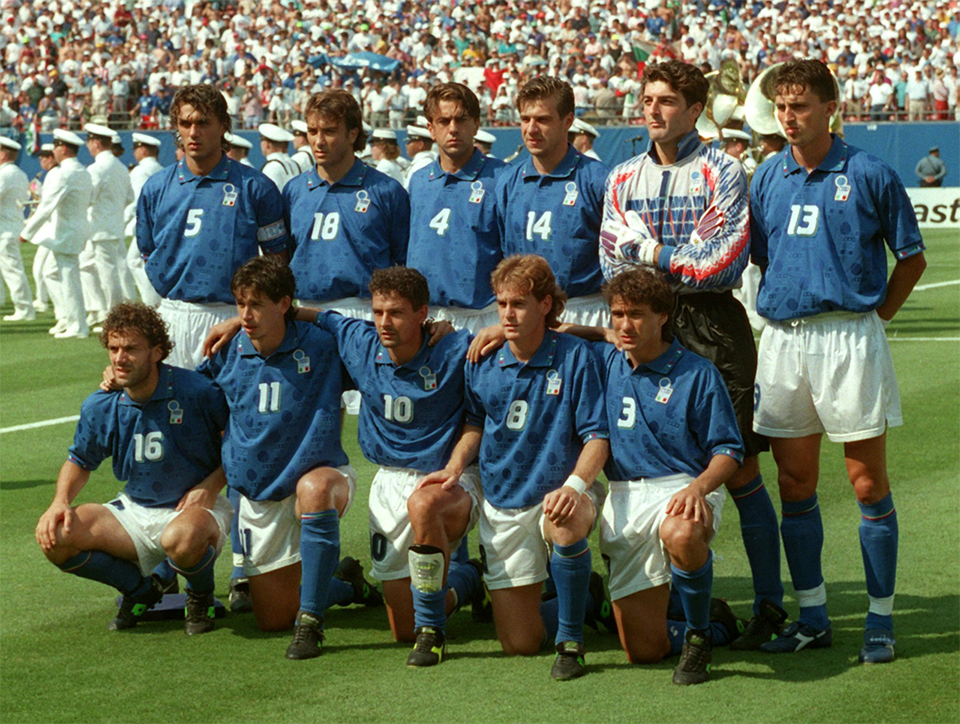 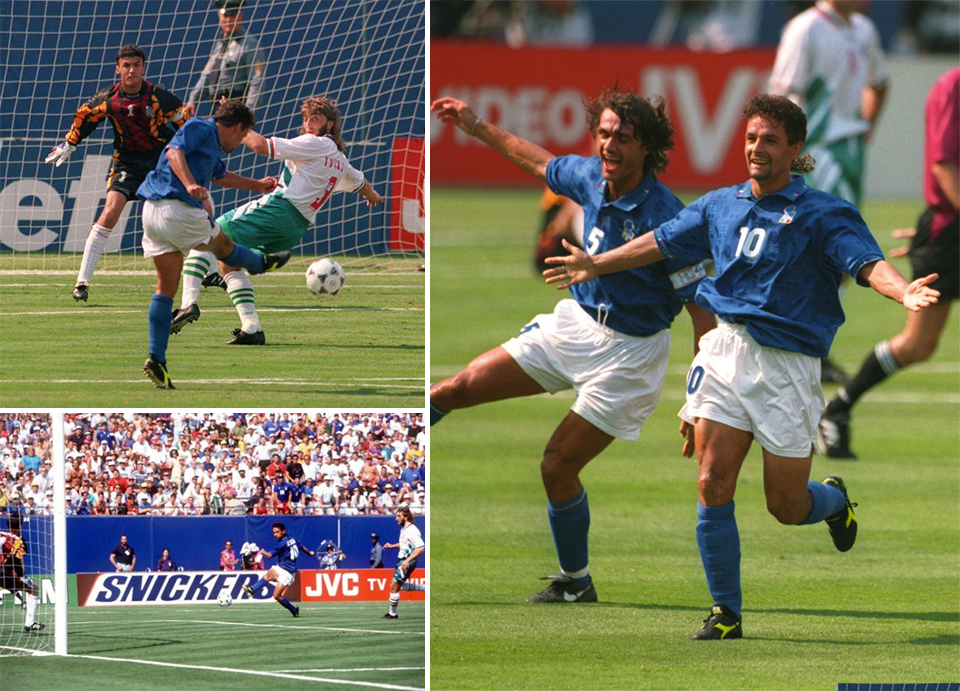 Italy’s two-goal was replaced in the second half, officially to rest for the final in Pasadena, but his tears and precautionary ice-pack suggested an injury. The 26-year-old was at the peak of his career, having won a UEFA Cup and Ballon d’Or the previous year. Now he had embarked on embarked on a one-man, three-match, five-goal crusade that culminated with a berth in the World Cup Final against Brazil, the likelihood of which had seemed highly improbable just two weeks earlier. His performances in the latter stages of the competition recalled those of Paolo Rossi’s in 1982: both players had shaken off indifferent early results to come up with vital goals at just the right moment. Yet while Rossi’s good run continued through to the final, a clearly unfit Baggio was left to hobble about the Rose Bowl in the midday sun, his thigh heavily strapped. 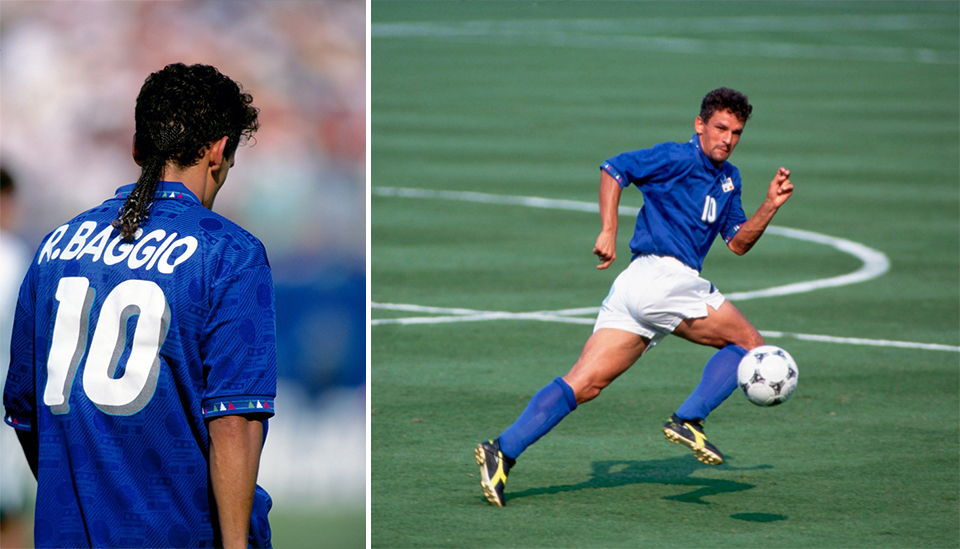 For the final the bar moved its television set outside into the car park and set up rows of seats for locals to come and watch. I sat wearing my new Italy shirt holding a tricolore flag on a stick which I’d bought six years earlier in Siena. I was one of my most memorable football viewing experiences, surrounded by a small town of nervous and excited Italian strangers, our faces bathed in the glow of the screen. I remember the local boys chanting “Cafú, tu sei un figlio di puttana!” after the full-back came on for the injured Jorginho. The 1994 final is often recalled as a negative, even boring final, probably because it ended goalless after 120 minutes. But the game was not without incident, and poor finishing by both sides was the only reason the contest went to the wire. Romário, Bebeto and Massaro all missed good chances, and Roberto squandered an opportunity he would have probably buried a few days earlier. Both sides resorted to long-range efforts in extra-time, except for Brazilian substitute Viola, whose skillful run almost resulted in a fantastic winning goal. And so a World Cup final was decided by a penalty shoot-out for the first time, a most unsatisfactory climax to what had generally been a highly entertaining tournament. 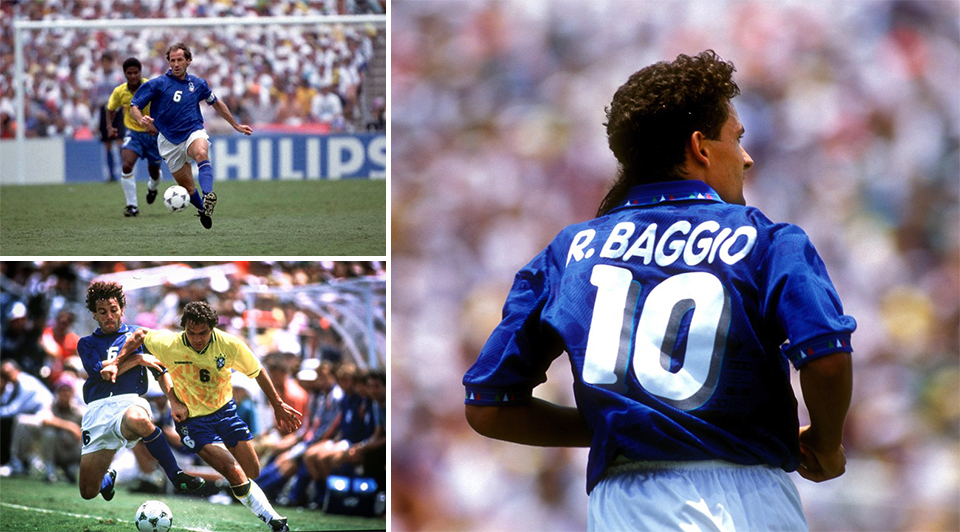 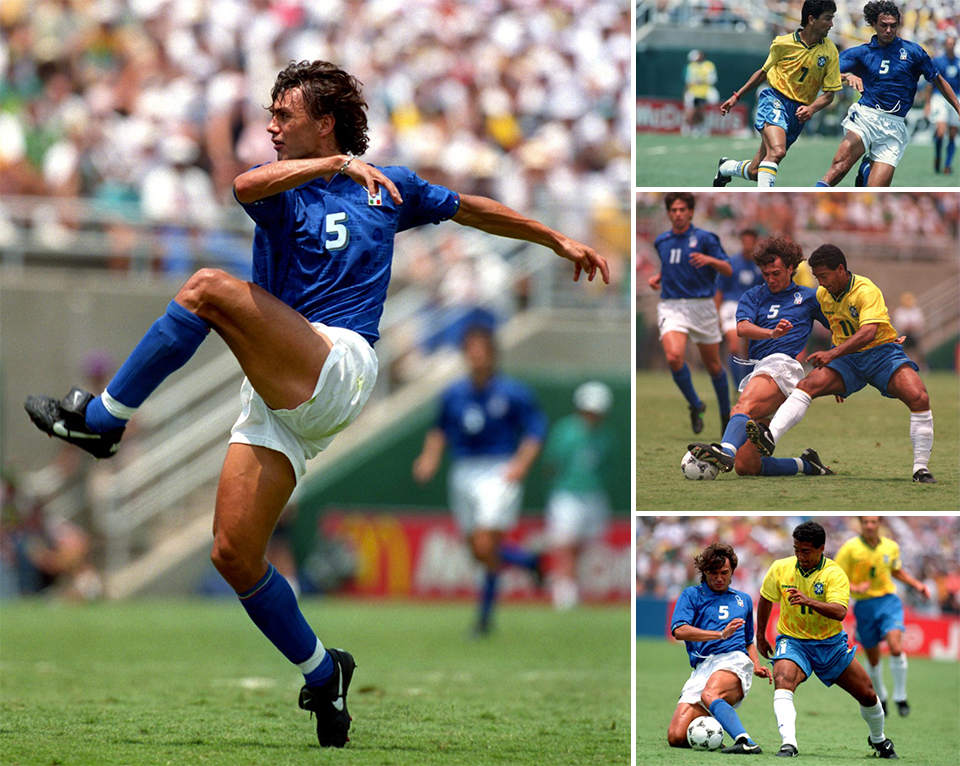 Italian hopes were restored when Pagliuca saved from Marcio Santos following Baresi’s initial miss. Then Albertini, Romário, Evani and Branco all scored. Taffarel saved from Massaro’s fourth kick and then Brazilian captain Dunga scored, putting all the pressure on Italy’s five-goal hero Roberto Baggio, who launched his tired shot into the skies of Southern California. I can still remember Pizzul’s typically understated utterance the moment Brazil were crowned world champions for a record fourth time: “Alto. Il campionato del mondo è finito.” I’d felt a strong connection to the Azzurri since the previous World Cup in Italy, and when Baggio’s last penalty sailed over the bar those feelings grew even deeper. Women and children were in tears, and powerless ragazzi began hurling plastic and wooden chairs over the fence and onto the train tracks out of sheer frustration. For the next few days the atmosphere was one of a nation in mourning.

From that point on I always felt that Baggio seemed to carry an air of melancholia, as if a part of him had remained forever rooted to that penalty spot in Pasadena. “Penalties are missed only by those who dare take them,” he would say, almost as if it were a mantra he was using to get over the trauma. Through the rest of the decade Baggio’s involvement with the national team would become more sporadic. Italy flopped at Euro ’96 and lost again on penalties to the hosts at France ’98 (although this time Baggio scored his kick). The quirky “I” logo was finally removed from the Azzurri shirt in 1999 and replaced with the classic tricolore badge sported throughout the sixties and seventies, as football design became increasingly influenced by its past in the new millennium. Subsequent Italy coaches including Dino Zoff and Giovanni Trapattoni were reluctant to recall Baggio to the team, citing age, fitness concerns and club form as reasons to leave him out. After not making the squads for the 2002 World Cup nor Euro 2004 despite huge public demand, Baggio was given an international send-off in a friendly against Spain in Genoa, a match that marked his 56th cap. No Italian player had been honoured in this way since Silvio Piola, but to me it seemed appropriate. Whether it was because he was denied football’s ultimate prize in the cruellest manner possible, or because this pony-tailed Buddhist was such an unconventional Italian hero, his popularity had never faded. Having represented Vicenza, Fiorentina, Juventus, Milan, Bologna, Inter and Brescia, Baggio always seemed to belong more to the national team than to any one club side.